It’s nice to have a rare free moment to catch up on blog posts.  This is our first day since I wrote last without any traveling.  Since my last post, we traveled from Saigon to Can Tho, a city on the bank of the Hau River in the Mekong Delta, to Chau Doc for a night en route to Phnom Penh, Cambodia, where we arrived yesterday by speed boat.  Tomorrow we’ll depart for the island Koh Rang, followed by Sihanoukville then Siem Riep.

With so much travel, I’ll focus on what has stood out rather than attempting a full narrative.  And in the future, along with narrative posts about our travel, we’ll also write blog posts with practical tips on packing, traveling, use of technology, etc.

In Saigon, we took a bus tour with Singh Travel to see the Cu Chi tunnels, a network of tunnels used by the Vietcong, about 70km outside of the city.  I’d hesitate to recommend it to other travelers, especially if they only have a few days in Saigon.  It’s about a 2 hour bus ride each way.  We didn’t like our tour guide, who punctuated most sentences with the phrases, “Do you know why?  You don’t know.  I’ll tell you later in the tunnels.”  This was funny because after hours of buildup to the tunnels, looking at exhibits of traps and tunnel entrances in the forest, he didn’t come into the tunnels with us.  We only went through a short stretch, which was very claustrophobic.  You have to crouch and duck walk, and we were in a section that had actually been widened.  It also poured rain throughout the tour, which was fun at first, running through the forest for cover, but became uncomfortable.

We took a Futa night bus to Can Tho (although it was a daytime trip) which we would recommend when possible.  For a dollar more you get reclining seats to lie down.  The bus had Wifi so we enjoyed watching Netflix as we traveled.  We can’t get Hulu or cable channels here, but fortunately Netflix is international.

The highlights of Can Tho were the street food markets and the famous floating markets.  We took a 7 hour tour on a small boat arranged by our hotel, which took us to both markets, Cai Rang and Phong Dien.  Our boat left at 5:30am because the markets are only active during the morning.  At the markets, hundreds of boats sell their wares, primarily vegetables and produce.  A sample is tied to the top of a pole in front to advertise what they’re selling.  We enjoyed pineapple and watermelon and I bought a much-needed hat to protect against the sun.  Our boat also took us down canals and into small villages, where we saw how rice noodles are made.  We had elected not to pay for a guide after the last experience and to save money, and our boat driver did not speak English.  At one point she pulled to the river bank and gestured for us to get onto shore and walk.  We walked for a ways, unsure why, and she met us further down the river.  She was laughing as she said “Bye bye” and pretended to leave without us.  It was incredible to see the people who live along the river, in their boats and metal-sided homes.  We saw people bathing and playing.  It was sad to see non-biodegradable trash thrown into the river.  There was so much trash in it that our boat driver had to stop multiple times to unwind trash that stopped the propeller.

We took a bus that night to Chau Doc to catch a speed boat into Cambodia the next morning.  We definitely recommend traveling by speed boat rather than bus when possible.  Although it cost about $10 more, it saved us at least 5 hours.  The seats and leg room were comfortable and the boat staff helped us quickly obtain visas and go through immigration.  And I loved the views of life along the riverbank.

We are really enjoying the city of Phnom Penh.  It has wide streets with lots of trees and a riverfront district with great bars and restaurants.  All of the food we have eaten so far has been cheap and delicious, from clay pot seafood dishes to sour lime soup with tilapia.  We had some funny moments bar hopping last night.  Daniel thought that Sugar Bar across the street from our hostel looked like a chill dive bar, but when we started to go inside we realized that it was full of hookers.  We went to another block where all the bars were the same, except for one, Red Fox, which was full of older male ex-pats.  The bartenders were all funny, making jokes with the regulars, and we enjoyed the ambience and 80’s music there.

The best way to travel around the city is by tuk tuk, a two wheeled carriage pulled behind a scooter.  It’s relatively cheap and it feels great to enjoy the breeze on a hot day.  Today we had one for the whole day for $20, and he took us to the Tuol Sleng Museum of Genocidal Crimes, the Killing Fields, the Royal Palace, and the Russian Markets.  I struggle with putting the experience of visiting the museum and Killing Fields into words.  Between 1975 and 1979, 1 in 4 Cambodians were killed by Pol Pot’s Khmer Rouge regime.  They targeted those who lived in cities and were educated.  Daniel and I spoke about how little we had learned about this genocide in school.  At the museum and Killing Fields, you get headphones and listen to recordings as you progress, which was well done.  In contrast to the War Remembrance museum in Vietnam and its incredible documentation, what remains to record the Cambodian genocide at the museum, other than photographs of prisoners with numbers, is more limited.  There is a monument to the victims with skulls piled high above you.  It is a profoundly awful and arresting visual.  Gazing upwards, I was also aware of my inability to comprehend the scope of how many people were killed. 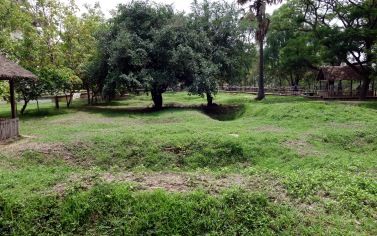 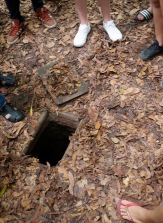 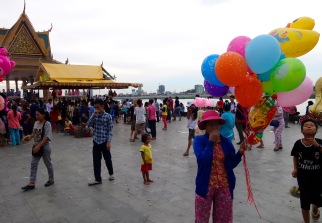 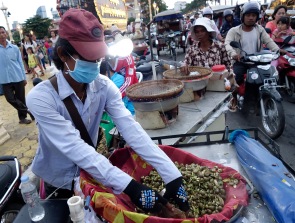